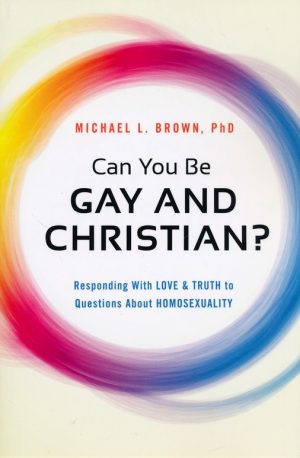 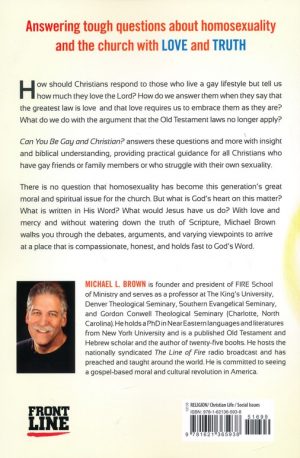 Can You Be Gay and Christian? Responding with Love & Truth to Questions About Homosexuality

Can You Be Gay and Christian? Responding with Love & Truth to Questions About Homosexuality

How do we respond to gay people who tell us how much they love the Lord and experience God’s power? How do we answer them when they say that the greatest law is the law of love, and that love requires us to embrace them as they are? What do we do with the argument that the Old Testament laws (such as the prohibition against homosexuality and the dietary laws) no longer apply?

Can You Be Gay and Christian? answers these questions and more with insight and biblical understanding, providing practical guidance for all Christians who have gay friends or family members or who struggle with their own sexuality.

Michael L. Brown is the founder and president of AskDrBrown Ministries and of FIRE School of Ministry in Concord, North Carolina, and host of the daily, nationally, syndicated talk radio show, the Line of Fire. He also hosts TV shows on GOD TV, METV (in Israel and the Middle East), and NRBTV. He became a believer in Jesus in 1971 as a sixteen year-old, heroin-shooting, LSD-using Jewish rock drummer. Since then, he has preached throughout America and around the world, bringing a message of repentance, revival, reformation, and cultural revolution.

Dr. Brown is the author of more than 35 books, including, Our Hands Are Stained with Blood: The Tragic Story of the “Church” and the Jewish People, which has been translated into more than twelve languages, the highly-acclaimed five-volume series, Answering Jewish Objections to Jesus, commentaries on Jeremiah and Job , and numerous books on revival and Jesus revolution. His newest books are Evangelicals at the Crossroads: Will We Pass the Trump Test? (2020), When the World Stops: Words of Hope, Faith, and Wisdom in the Midst of Crisis (2020) and Resurrection: Investigating a Rabbi From Brooklyn, a Preacher From Galilee, and an Event That Changed the World (2020).

Dr. Brown is a national and international speaker on themes of spiritual renewal and cultural reformation, and he has debated Jewish rabbis, agnostic professors, and gay activists on radio, TV, and college campuses. He is widely considered to be the world’s foremost Messianic Jewish apologist.

He and his wife Nancy, who is also a Jewish believer in Jesus, have been married since 1976. They have two daughters and four grandchildren.

The Holy Spirit: His Gifts and Power