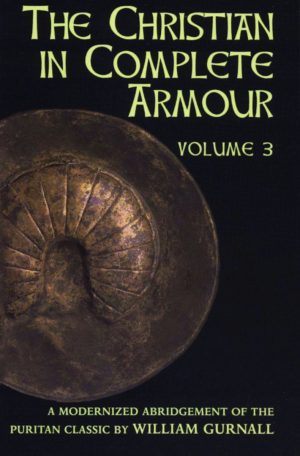 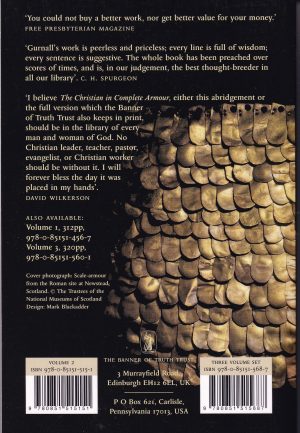 The Christian in Complete Armour: Volume 3

The Christian in Complete Armour: Volume 3

The Christian in Complete Armour is certainly one of the greatest of all the Puritans’ practical writings. This third volume in the 3-volume paperback set is a modernized abridgement of the Puritan Classic by William Gurnall.

William Gurnall (1616-1679) was born in the coastal town of Lynn, Norfolk, about a hundred miles north of London. His father was first an alderman (town council member), then mayor of Lynn, a chief town of the most thoroughly Protestant district of England in the seventeenth century. The inhabitants of Norfolk and Suffolk counties were famous for their deep attachment to the doctrines of the Reformation.

An excellent scholar, Gurnall was awarded a scholarship from the city of Lynn to attend Emmanuel College, Cambridge. He began his formal training there in his 16th year, shortly after his father’s death. He earned a bachelor’s degree in 1635 and a master’s degree in 1639.

At the age of 28, William Gurnall was appointed curate and then rector – on the death of the incumbent – of the church at Lavenham, Suffolk, then a town of about 1,800 inhabitants, half of whom were his parishioners. A year later he married a minister’s daughter, Sarah Mott, who bore him at least fourteen1 children, eight of whom survived him. Gurnall spent the rest of his life, dogged by ill-health, in this pastorate.

The years during which Gurnall served the parish at Lavenham were filled with momentous events in English history: a civil war, the beheading of King Charles I, the declaring of a protectorate under Puritan leader Oliver Cromwell, then the death of Cromwell, and the restoration of the monarchy under King Charles II. But the most significant event for Gurnall was the passing of the Act of Uniformity in 1662. He chose to remain in the Church, signed the declaration required by the Act, and was ordained a priest by the evangelical Bishop Reynolds of Norwich. His reputation amongst the Puritans consequently suffered and is probably the reason so little has been written about William Gurnall in the annals of church history.

It was during this time of civil and religious strife and controversy that Gurnall preached to his parishioners his messages on spiritual warfare. With the help of a benefactor, Gurnall published his material in three volumes between 1655 and 1662 – The Christian in Complete Armour. He dedicated the first volume to the inhabitants of Lavenham.

Gurnall died on October 12, 1679, in the 63rd year of his life. The fact that a sixth edition of his work was published in the year he died is enough to show that its merits were early recognized.

The Trust publishes The Christian in Complete Armour in full in a facsimile of the 1864 edition, and also a modernized abridgement in three paperback volumes.

NOTES
J. C. Ryle in his ‘Biographical Account of the Author’, included in the Trust’s one-volume edition of The Christian in Complete Armour, says ten.

The Holy Spirit: His Gifts and Power