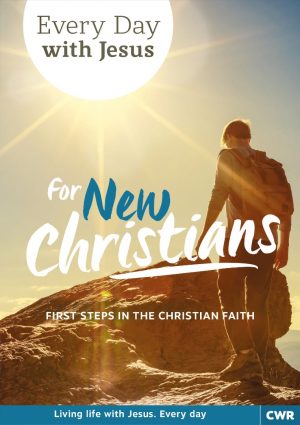 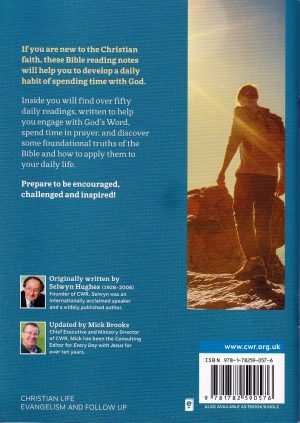 Every Day With Jesus For New Christians

Every Day With Jesus For New Christians

A powerful and relevant guide for people new to the Christian faith or for people who need the basics presented to them clearly and dynamically. A favourite with churches across denominations.

As a young miner working in the dark pits of South Wales, Selwyn Hughes was called by God into full-time ministry.

He left the mines to study theology in Bristol and, having grown up on stories of the famous Welsh revival of the early 20th century, Selwyn always had revival at the heart of his ministry.

For 18 years he was a pastor in England and Wales but, after establishing a church in central London, he felt God was calling him to a wider ministry and in 1965 he founded CWR.

An evangelist at heart, it gave him great joy to preach the Gospel in many countries.

Selwyn's international ministry spanned 5 continents, and he reached many thousands through his teaching, preaching and evangelistic campaigns.

Over the years he designed and delivered follow-up seminar programmes on Christian discipleship motivated by a deep desire to teach believers not only what they should do as Christians, but how to do it.

Coincidental to the founding of CWR, Selwyn had begun writing his now famous daily devotional, Every Day with Jesus, to encourage Christians to read their Bibles regularly. His writing combined topical and expositional Bible study with the insights into Christian living he had gained as a pastor.

Every Day with Jesus began as brief notes printed on simple postcards; today it has nearly a million regular readers worldwide.

Selwyn's ministry helping people with their problems led him to study psychology and counselling in the USA. His studies and research resulted eventually in the development of his own unique model of counselling based on a biblical understanding of how people function.

The CWR counselling model that Selwyn developed became so successful that it was incorporated into the curriculum of London Bible College (now London School of Theology).

Trevor Partridge contributed to many of Selwyn's early publications and helped to develop our range of training seminars and courses.

Due to the growing demand for CWR's teaching and training ministry, Waverley Abbey House, a Georgian manor house in Surrey, was purchased in 1984 to serve as a centre of excellence in Christian publishing and training.

Jeannette Barwick launched our Ministry to Women in 1988 and, in the late 90s, Philip Greenslade joined us as a writer, course designer and presenter in the areas of biblical theology and pastoral leadership.

Selwyn continued to write and teach, contributing to the ministry of CWR until his death in 2006.

Today CWR has a flourishing publishing and training ministry enabling Christians in 160 countries to apply God's Word to everyday life and relationships.

And we continue to work with talented authors and presenters like Jeff Lucas, adding to our range of life-transforming products and courses.

Selwyn fully participated in the plans that have been made to expand the ministry and influence of CWR. Building on the solid foundations of the past and CWR's present position of strength, we look to the future with eager anticipation and confidence in God's leading.

Under the guidance of Chief Executive Mick Brooks, CWR continues to publish and teach around the world, extending our ministry's reach and expanding our range of products and services for the Church worldwide.

As Selwyn said: "I believe we are poised to experience a new wave of blessing that will surpass anything we have ever known before. Come walk with us as we seek to walk with Him."

SEE WITH ME BIBLE HB