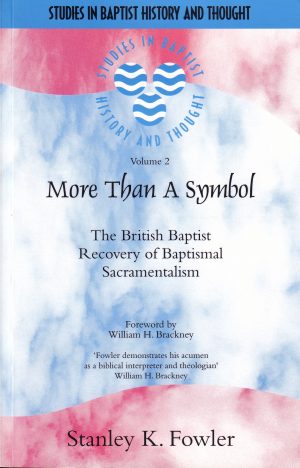 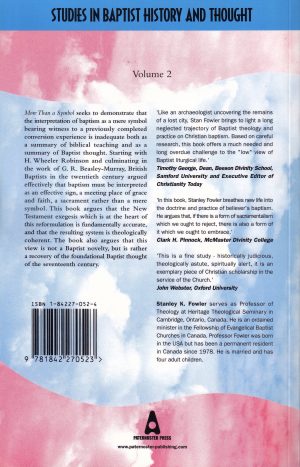 More Than a Symbol: The British Baptist Recovery of Baptismal Sacramentalism (Studies in Baptist History and Thought): 02

More Than a Symbol: The British Baptist Recovery of Baptismal Sacramentalism (Studies in Baptist History and Thought): 02

‘More Than a Symbol’ seeks to demonstrate that the interpretation of baptism as a mere symbol bearing witness to a previously completed conversion experience is inadequate both as a summary of biblical teaching and as a summary of Baptist thought. Starting with H. Wheeler Robinson and culminating in the work of G. R. Beasley-Murray, British Baptists in the twentieth century argued effectively that baptism must be interpreted as an effective sign, a meeting place of grace and faith, a sacrament rather than a mere symbol.

This book argues that the New Testament exegesis that is at the heart of this reformulation is fundamentally accurate, and that the resulting system is theologically coherent. The book also argues that this view is not a Baptist novelty, but is rather a recovery of the foundational Baptist thought of the seventeenth century.