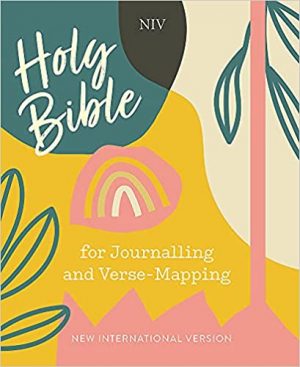 NIV Bible for Journalling and Verse-Mapping

NIV Bible for Journalling and Verse-Mapping

The NIV Bible for Journalliing and Verse-Mapping is a beautifully presented Bible for you to treasure. The New International Version of the Scriptures is printed in clear, easy-to-read 9PT British Text on thicker than usual Bible paper, with a five centimetre margin on every page, giving you lots of extra room for notes, reflections, illustrations or Bible studies. A 32-page concordance can be found at the back. The Bible text is interspersed with 32 pages introducing the art of verse-mapping. This Bible study method encourages you to prayerfully choose a verse, compare it with other translations, study the context, including the history and characters mentioned, and then reflect and allow the Spirit to guide you in application. There are also verses to colour in, with lots of space around them for you to add your own illustrations, and many other pages with creative prompts for Bible journalling.

The New International Version (NIV) is a completely original translation of the Bible developed by more than one hundred scholars working from the best available Hebrew, Aramaic, and Greek texts.

The initial vision for the project was provided by a single individual – an engineer working with General Electric in Seattle by the name of Howard Long. Long was a lifelong devotee of the King James Version, but when he shared it with his friends he was distressed to find that it just didn’t connect. Long saw the need for a translation that captured the truths he loved in the language that his contemporaries spoke.

For 10 years, Long and a growing group of like-minded supporters drove this idea. The passion of one man became the passion of a church, and ultimately the passion of a whole group of denominations. And finally, in 1965, after several years of preparatory study, a trans-denominational and international group of scholars met in Palos Heights, Illinois, and agreed to begin work on the project – determining to not simply adapt an existing English version of the Bible but to start from scratch with the best available manuscripts in the original languages. Their conclusion was endorsed by a large number of church leaders who met in Chicago in 1966.

A self-governing body of fifteen biblical scholars, the Committee on Bible Translation (CBT) was formed and charged with responsibility for the version, and in 1968 the New York Bible Society (which subsequently became the International Bible Society and then Biblica) generously undertook the financial sponsorship of the project. The translation of each book was assigned to translation teams, each made up of two lead translators, two translation consultants, and a stylistic consultant where necessary. The initial translations produced by these teams were carefully scrutinized and revised by intermediate editorial committees of five biblical scholars to check them against the source texts and assess them for comprehensibility. Each edited text was then submitted to a general committee of eight to twelve members before being distributed to selected outside critics and to all members of the CBT in preparation for a final review. Samples of the translation were tested for clarity and ease of reading with pastors, students, scholars, and lay people across the full breadth of the intended audience. Perhaps no other translation has undergone a more thorough process of review and revision. From the very start, the NIV sought to bring modern Bible readers as close as possible to the experience of the very first Bible readers: providing the best possible blend of transparency to the original documents and comprehension of the original meaning in every verse. With this clarity of focus, however, came the realization that the work of translating the NIV would never be truly complete. As new discoveries were made about the biblical world and its languages, and as the norms of English usage developed and changed over time, the NIV would also need to change to hold true to its original vision.

And so in the original NIV charter, provision was made not just to issue periodic updates to the text but also to create a mechanism for constant monitoring of changes in biblical scholarship and English usage. The CBT was charged to meet every year to review, maintain, and strengthen the NIV’s ability to accurately and faithfully render God’s unchanging Word in modern English.

The 2011 update to the NIV is the latest fruit of this process. By working with input from pastors and Bible scholars, by grappling with the latest discoveries about biblical languages and the biblical world, and by using cutting-edge research on English usage, the Committee on Bible Translation has updated the text to ensure that the New International Version of the Bible remains faithful to Howard Long’s original inspiration.

WHY THE CROSS PB

SEE WITH ME BIBLE HB