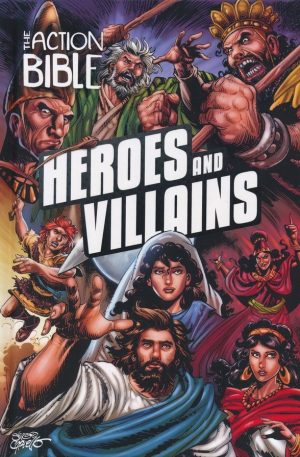 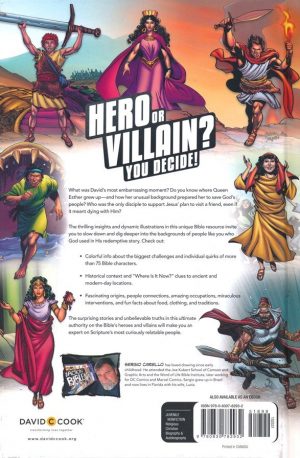 The Action Bible: Heroes and Villains

The Action Bible: Heroes and Villains

“Hero or villain? You decide!” This all-new addition to the bestselling Action Bible line bursts with fun facts, surprising stories, and full-color art for every young reader who wants to become an expert about the greatest heroes and villains of God’s redemptive story.

This extensive, full-color guide to Bible characters includes fascinating facts and figures about the Bible’s most curious but sometimes relatable people.

Including all-new illustrations from graphic artist Sergio Cariello, The Action Bible: Heroes and Villains draws in young readers with:

From Adam and Eve’s most embarrassing moment to the details of a Roman soldier’s armor to Zechariah’s hometown, the unique insights and dynamic illustrations in this jam-packed guide jump off the pages and into kids’ minds and hearts as they meet people just like them whom God used in His redemptive story.

Sergio Cariello
Florida, United States
Born in Brazil.At the age of 5 I already knew I wanted to draw comics.At 11 I had my first comic strip published in Local newspapers-Frederico, the Detective. At Caliber Press penciled, inked and lettered the HP Lovecraft's Dagon, with writer Steven Jones.At Marvel I drew Daredevil,Conan,Thor, Captain America, Disney's Quasimodo,Spider-man, the Avengers and others.Drew Batman, Superman, New Gods, Young Heroes in Love, Superboy, Steel, Guy Gardner, Hawkman, Man called X, The Flash, Deathstroke,Wonderwoman, Green Arrow, Azrael and others for DC.Taught 7 yrs at the Joe Kubert School.Member of the National Cartoonists Society since 1995.Worked with Chuck Dixon and Beau Smith in the Wildcat mini-series.Dark Horse(Beau's and mine Badlander), Image(Spawn),Sojourn, Lady Death, Scion, Crux, and other Crossgen titles,Iron Ghost with Chuck and ATP) and many others. worked on Will Eisner nominee the Lone Ranger(Dynamic Forces), Son of Samson with writer Gary Martin for Zondervan, the Bestseller New Picture Bible for David C Cook , The Action Bible. Currently working on various gigs here and there.

The Lone Ranger( Dynamite)
Best Western comic Book of the Year -Awarded by True West Magazine- True West Best of the West - 2009
Will Eisner Nomination( Hey, I know :NOT an Award but worth mentioning.) for best New Comic Book Series -2007

HE MADE THE STARS

WHY WAS DEBORAH MAD?