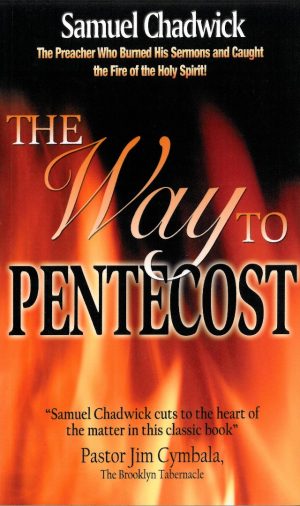 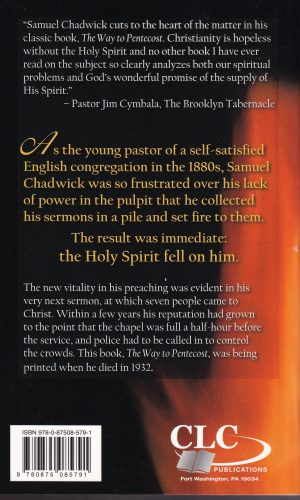 The Way To Pentecost

The Way To Pentecost

As a young pastor of a self-satisfied English congregation in the 1880’s, Samuel Chadwick was so frustrated over his lack of power in the pulpit that he collected his sermons in a pile and set them on fire.

“Samuel Chadwick cuts to the heart of the matter in his classic book, The Way to Pentecost. Christianity is hopeless without the Holy Spirit and no other book I have every read on the subject so clearly analyses both our spiritual problems and God’s wonderful promise of the the supply of His Spirit.” Pastor Jim Cymbala. The Brooklyn Tabernacle.

Samuel Chadwick (1860-1932) was born in the industrial north of England. His father worked long hours in the cotton mill and, when he was only eight, Samuel went to work there, too, as a means of supporting the family. Devout Methodists, they attended chapel three times on Sunday, and as a young boy, Chadwick gave his heart to Christ. Listening to God’s word week by week, he often felt the inner call to serve Jesus. It seemed impossible, as he was poor and uneducated, but in faith he made preparations. After a twelve-hour factory shift he would rush home for five hours of prayer and study.

At the age of 21 he was appointed lay pastor of a chapel at Stacksteads, Lancashire. He found the congregation self-satisfied, but Chadwick threw himself into the work with great optimism. He had been trained to prepare well-researched and interesting sermons as the sure way to bring in the crowds. He recalled later: “This led unconsciously to a false aim in my work. I lived and laboured for my sermons, and was unfortunately more concerned about their excellence and reputation than the repentance of the people.”

Soon, however, his sermons were exhausted and nothing had changed. Staring defeat in the face and sensing his lack of real power, an intense hunger was kindled within him for more of God. At this point he heard the testimony of someone who had been revitalised by an experience of the Holy Spirit. So, with a few friends he covenanted to pray and search the scriptures until God sent revival.

One evening he was praying over his next sermon, when a powerful sense of conviction settled on him. His pride, blindness and reliance on human methods paraded before his eyes as God humbled him to the dust. Well into the night he wrestled and repented, then he got out his pile of precious sermons and threw them on the fire!

The result was immediate – he was baptised with the Holy Spirit and with fire [Luke 3:16].

“I could not explain what had happened, but it was a bigger thing than I had ever known. There came into my soul a deep peace, a thrilling joy, and a new sense of power. My mind was quickened. I felt I had received a new faculty of understanding. Every power was vitalised. My body was quickened. There was a new sense of spring and vitality, a new power of endurance and a strong man’s exhilaration in big things.”

The tide turned. At his next service, seven people were converted (“one for each of my barren years”), and he called the whole congregation to a week of prayer. The following weekend most of the church was filled with the Holy Spirit and revival began to spread through the valleys. In the space of a few months, hundreds were converted to Jesus, among them some of the most notorious sinners in the area.

The pattern was repeated over the next few years as Chadwick moved to various places. 1890 saw him in Leeds, where the power of God was so strongly upon him that the chapel was full half an hour before the service began, and police had to control the crowds. Chadwick records: “We were always praying and fighting [the devil], singing and rejoicing, doing the impossible and planning still bigger things. The newspapers never left us alone, and people came from far and wide.” Within a few years, the chapel had to be demolished and a substantial Mission Hall built.

Always a man of the people, Chadwick would spend his Saturdays mixing with local workers. Once, when his wife was away, he teasingly invited anyone who was lonely to come for Saturday tea. He expected about a dozen. 600 turned up! Yet God had already catered: one church member was a baker and had been awoken by the Lord with the order to bake for all he was worth!

Chadwick was a man of prayer and urged others to it too. “The one concern of the devil is to keep Christians from praying,” he wrote. “He fears nothing from prayerless studies, prayerless work and prayerless religion. He laughs at our toil, mocks at our wisdom – but trembles when we pray!”

The final phase of Chadwick’s life was spent as Principal of Cliff College, a Methodist training school for preachers, and it was here that he wrote his famous book, The Way to Pentecost, which was being printed when he died in 1932. In it we read:

“I owe everything to the gift of Pentecost. For fifty days the facts of the Gospel were complete, but no conversions were recorded. Pentecost registered three thousand souls. It is by fire that a holy passion is kindled in the soul whereby we live the life of God. The soul’s safety is in its heat. Truth without enthusiasm, morality without emotion, ritual without soul, make for a Church without power.”

The Path Of Prayer